The 10 Major Causes Of Failure In Leadership

In 1937, Napoleon Hill wrote his book Think and Grow Rich as a personal development and self-improvement book. This book is a must-read for anyone who aspires to great leadership because the philosophies in this book are really eye-opening and it can help anyone succeed in any line of work, regardless of their location, gender, ethnicity or social standing.

I read this book for the first time last week; I read it again and I listened to the audio version to ensure I got everything from it and I plan to read again. It is absolutely one of the best books I ever read but what was amazing is the fact that the principles of leadership outlined in this book are so applicable in 2019.

I want to share with you the 10 major causes of failure in leadership as outlined by Hill. The fact that these failures are so apt for our generation of leaders makes this book a very fascinating read.

Efficient leadership calls for the ability to organize and to master details. No genuine leader is ever “too busy” to do anything which may be required of him/her as a leader. The successful leader must be the master of all details connected with the position. That means, of course, that he/she must acquire the habit of relegating details to capable lieutenants.

Truly great leaders are willing, when occasion demands, to perform any sort of labor which they would ask another to perform. “The greatest among ye shall be the servant of all” is a truth that all able leaders observe and respect.

EXPECTATION OF PAY FOR WHAT THEY “KNOW” INSTEAD OF WHAT THEY DO WITH THAT WHICH THEY KNOW.

The world does not pay men/women for that which they “know.” It pays them for what they DO, or induce others to do.

FEAR OF COMPETITION FROM FOLLOWERS.

The leader who fears that one of his/her followers may take his position is practically sure to realize that fear sooner or later. The able leader trains understudies to whom he/she may delegate, at will, any of the details of his/her position. Only in this way may a leader multiply their attention and prepare themselves to be at many places, and give attention to many things at one time.

Without imagination, the leader is incapable of meeting emergencies, and of creating plans by which to guide his followers efficiently.

The leader who claims all the honor for the work of his followers is sure to be met by resentment. The really great leader CLAIMS NONE OF THE HONORS. He/she is contented to see the honors, when there are any, go to his/her followers, because they know that most people will work harder for commendation and recognition than they will for money alone.

Followers do not respect an intemperate leader. Moreover, intemperance in any of its various forms destroys the endurance and the vitality of all who indulge in it.

Perhaps this should have come at the head of the list. The leader who is not loyal to his trust, and to his associates, those above him/her, and those below them, cannot long maintain their leadership. Disloyalty marks one as being less than the dust of the earth and brings down on one’s head the contempt he deserves. Lack of loyalty is one of the major causes of failure in every walk of life.

EMPHASIS OF THE “AUTHORITY” OF LEADERSHIP.

The efﬁcient leader leads by encouraging, and not by trying to instill fear in the hearts of his/her followers. The leader who tries to impress their followers with their “authority” comes within the category of leadership through force. If a leader is a REAL LEADER, he/she will have no need to advertise that fact except by their conduct, sympathy, understanding, fairness, and a demonstration that they know their job.

The competent leader requires no “title” to give him the respect of his followers. The leader who makes too much over their title generally has little else to emphasize. The doors to the ofﬁce of the real leader are open to all who wish to enter, and their working quarters are free from formality or ostentation.

These are among the more common of causes of failure in leadership. Any one of these faults is sufﬁcient to induce failure. Study the list very carefully if you aspire to leadership, and make sure that you are free of these faults. There must be a new era of relationship between the leader and their employees, which very clearly calls for a new brand of leadership in business and industry. 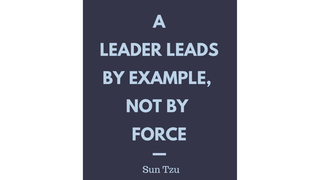